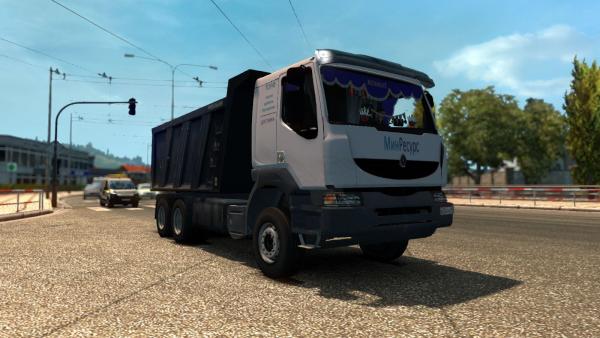 The truck of the French production of Renault Kerax in the modification of the dump truck, has the possibility of a trailer like a cart. It was produced since the late nineties, in 2009, the production of trucks in Kaluga was opened, production stopped at the main plant of the concern in 2013.

The mod of the Renault Kerax truck for Euro Truck Simulator 2 is very interesting, since the body and cab have inscriptions ascribing the car to a certain fleet, which is perfect for modifications that use Russian locations. A trailer is included in the kit - a cart, which makes the game more fun, because there is the opportunity not only to ride on the roads, but also to carry goods. Although the truck is foreign, it can be found worthy of use on the Russian map thanks to the specific stickers on the cab and the car body.

Tuning is very poor, almost nothing can be added or changed, except for installing a GPS navigator, ribbons and flags. But still, the Renault truck mod in the ETS 2 game occupies a worthy niche.

Dear user of the site, carrying out the transportation of goods on the virtual roads of Europe, for a variety of gameplay, do not forget to download and install new maps for any version of the simulator ETS 2!
Renault truck dump truck trailers
Previous modNext mod

The game world of Euro Truck Simulator 2 is finally replenished with another rare Renault 1975 Saviem truck, made in high quality. The truck mod includes an original cabin with six skins and an...

The brainchild of French automotive engineers, the fuel-efficient van Renualt L2H2 with a carrying capacity of up to 1.5 tons, is designed to deliver goods in small batches over long distances. It is...