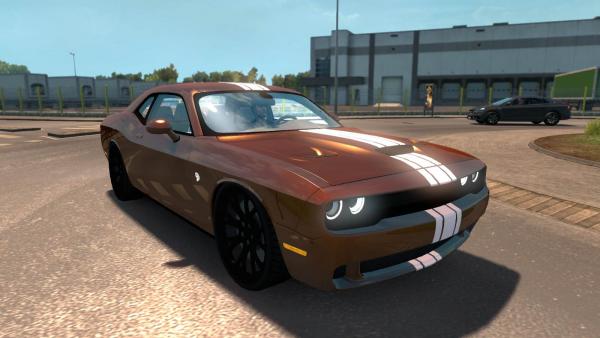 The iconic American Dodge Challenger coupe. During production, the car has found its fans, having made significant competition to such a sports car as the Chevrolet Camaro.

The mod of the Dodge Challenger SRT passenger car, model of 2015, for Euro Truck Simulator 2 has a highly detailed three-dimensional model, a characteristic body kit and an original interior with prescribed animation. When buying a car, the ETS 2 sim player will have access to an option with an engine with 808 horsepower and a six-speed gearbox, a tow bar for transporting light trailers; it is possible to select a body color with longitudinal stripes. Also, the authors of the modification did not forget to add a set of their own sound effects.

Dear site user, for cargo transportation by passenger car, do not forget to download and install the mod Passenger trailer for all ETS 2 simulator versions!
Dodge cars
Previous modNext mod

The sports car BMW M6 F13 is produced by BMW since the beginning of 2012. Its virtual version in Euro Truck Simulator 2 looks very realistic, thanks to a high-quality car model and textures. On the...

The BMW M5 F10 passenger car mod has a distinctive feature among similar additions; in the car dealership, when buying, you can choose the body option with an open hood, trunk lid and doors. In...