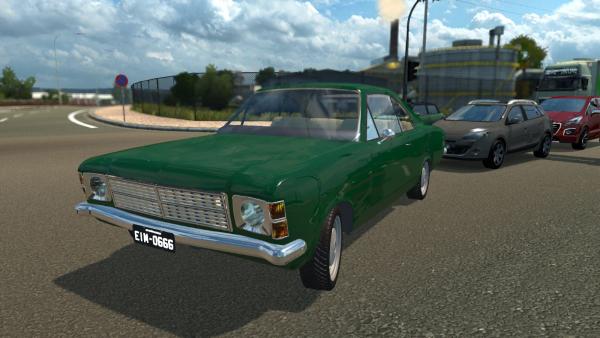 The iconic Chevrolet Opala SS mass-produced passenger car has been produced in Brazil for more than twenty years since 1969, the last instance of the passenger car rolled off the assembly line in 1992. The Chevrolet Opala car gained popularity not only due to the advanced body geometry at that time, an abundance of chrome elements, simple pro-Spartan, but at the same time spacious interior, but also powerful American engines, the volume of which ranged from 2.5 to 4.1 liters.

The Chevrolet Opala SS car mod for Euro Truck Simulator 2 absorbed all the beauty and power of a real prototype, the authors tried to convey to the classics everything that they could do, as a result, fans of the ETS 2 simulator received a cult car on which, after installing the mod map of Brazil, it is nice to drive along its wide routes and mountain roads, because the car was designed specifically for this country. The car is equipped with original disks with caps and tires, a choice of engines in the amount of three pieces is presented, 2.5, 3.8 and 4.1 liters, two types of gearboxes, at 3 and 4 speeds. Optionally, you can tint the glass, seal the rear window with a modable sticker, change the style of the registration plate or load boot luggage. True racing enthusiasts can replace the steering wheel with a sports-type steering wheel and add additional devices to the panel.

Dear site user, for cargo transportation by passenger car, do not forget to download and install the mod Passenger trailer for all ETS 2 simulator versions!
Chevrolet cars
Previous modNext mod