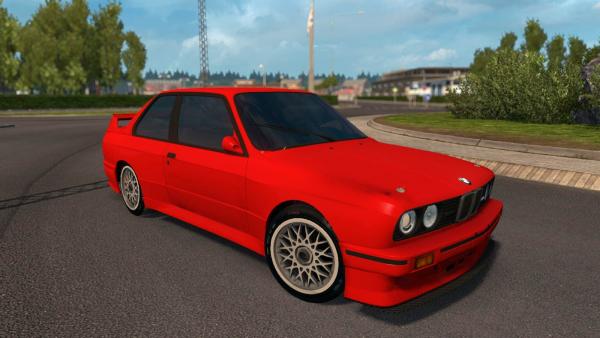 The production of the popular passenger car BMW M3 E30 began in 1986 and was carried out until 1992. The car was produced in the back of a two-door coupe, however, in a small batch of 786 copies, a convertible was also produced. A 2.3 liter engine was installed under the hood, and a five-speed manual gearbox added agility.

The mod of the BMW M3 E30 passenger car for Euro Truck Simulator 2 is made in excellent quality, the authors did not take ready-made models as a basis, but created a modification from scratch. The car is equipped with an engine with a capacity of 565 horsepower, which makes it more powerful than its more modern brother, the BMW 5 Series. The ETS 2 sim player will be delighted with a six-speed gearbox. The interior of the car is simple in Spartan, except for the driver's seat and the instrument panel, there is nothing that corresponds to the rally car version. When buying, you can choose a standard or lowered suspension, two types of tires and wheels, tinted windows, select the color scheme of the instrument panel and install a safety frame.

Top passenger car BMW 760Li from the German company BMW perfectly fit into the world of virtual European roads simulator ETS 2. Mod car made in perfect quality, which allows the car to look in the...

Luxury sports car Pagani Huayra by Italian manufacturers in the body such as a two-door coupe carbon fiber, the developer mode for the foundation was taken qualitative model, which has its own...