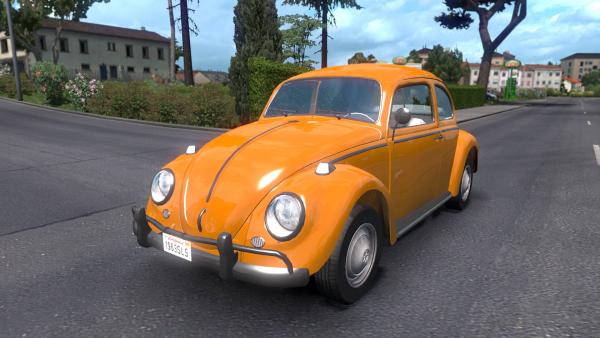 The Volkswagen Beetle car was listed in the Guinness Book of Records as the most massive in the history of the automotive industry. During the years of production from 1938 to 2003, more than 21 million passenger cars rolled off the assembly line, the Volkswagen Kafer practically did not undergo any structural changes in construction and design. A typical instance of a small car can be found in the traffic of the ETS 2 simulator, after installing the author’s addition to the classic transport.

The mod of the Volkswagen Beetle passenger car of 1963 for Euro Truck Simulator 2 is completely independent, the author partially recreated a typical original interior with prescribed animation, a 40 horsepower engine with genuine settings paired with a four-speed gearbox was installed under the hood.

Compact passenger car Citroen C2 in Euro Truck Simulator 2 has an Autonomous registration, that is, the mod occupies a separate slot in all showrooms simulator. The developers of the modification...

The legendary massive German passenger car Volkswagen Kafer, listed in the Guinness Book of Records, and produced for several decades, is now in our game. Thanks to the developers of the mod, any...