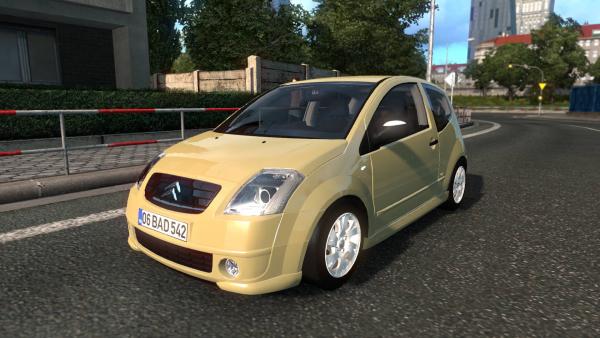 Compact urban passenger car Citroen C2, produced by the French automotive concern PSA Peugeot Citroen, began production in September 2003. In October 2005, the car underwent a minor upgrade, as a result, the car has gained new headlights, interior elements and improved electronics. In its dimensions, the subcompact is comparable to the legendary Volkswagen Beetle, which allows it to easily maneuver in dense street traffic.

Citroen C2 passenger car mod for Euro Truck Simulator 2 is fully Autonomous, the original interior of the cabin supports DLC Cabin Accessories. On the technical component, a pair of engines with a capacity of 88 and 122 horsepower and a six-speed gearbox are implemented. Well, for fans of tuning prepared a small set of accessories to improve the appearance of the car, which can be purchased in any of the showrooms simulator ETS 2.

RETURN
Tested on ETS2 versions: 1.35
For sale in salons: In all
Author(s) mod: trzpro, Berkay Aksoy

Dear site user, for cargo transportation by passenger car, do not forget to download and install the mod Passenger trailer for all ETS 2 simulator versions!
Citroen cars
Previous modNext mod

The interior of the cabin, for the players of the simulator, is far from last, so a group of developers created a new mod that complements the DLC Cabin Accessories with a large number of new items...