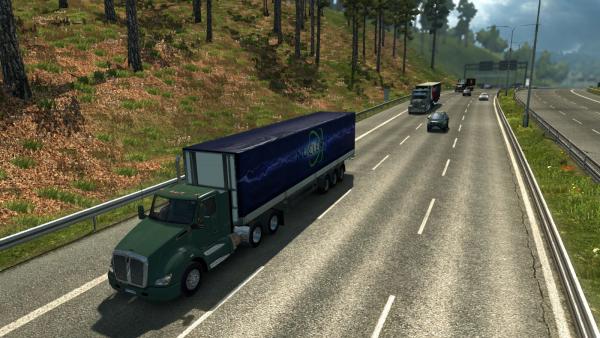 Surely every player in the simulator dreamed of a greater variety of vehicles found in traffic. And finally, we received the long-awaited addition from the famous developer of modifications for the ETS 2 Jazzycat, known for such well-known additions as the mod of the passenger traffic pack and the like. A characteristic feature of the mods of this author is their versatility and full compatibility with other copyright additions.

But, and now in more detail about the mod pack of American tractors for Euro Truck Simulator 2, after installation on the tracks there will be about thirty high-quality tractors, both empty and carrying various cargoes, of American production. The game world will receive significant transformation and diversity from bored trucks of the same type. A virtual trucker will be much more interested in traveling along the roads of Europe and additional maps. A driver with undisguised interest will appear behind a truck window a large number of tractors exported from the United States.

In the latest version of mod 2.4, tractors were added: Freightliner Cascadia, Mack Titan, as a result, there are 37 models of American trucks in traffic.

Dear user of the site, choosing your favorite number and variety of vehicles on the road, we recommend you to download and install additional map for your version of the simulator ETS 2!
traffic truck pack tractor
Previous modNext mod

An unusual and large-scale addition adds eight American trucks Peterbilt and Kenworth to the virtual world of roads, which can be purchased at new car dealerships located in Munich and Warsaw. Models...

The purpose of this modification is to strengthen and diversify the gameplay, making it as close as possible to reality. On the roads, a virtual trucker will come across more than 130 various trucks...