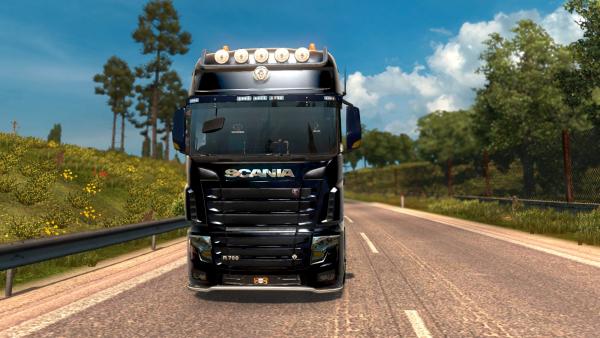 The modern powerful Scania R700 tractor manufactured by the Swedish company Scania AB, thanks to modern technical equipment, has taken its rightful place among manufacturers of trucks of this class. The power unit located under the cab has a sufficient power of up to 700 horsepower, which allows the vehicle to transport loads weighing up to 90 tons, including as part of a road train. Scania is also subject to the transportation of oversized cargo, which allows the truck to be operated in non-standard tasks.

The mod of the Scania R700 tractor for Euro Truck Simulator 2 was created on the basis of a high-quality three-dimensional model using original textures; in the latest version, the authors implemented a dozen types of chassis, with a chassis with a wheel formula of 4x4 and 10x8. Much attention was paid to the variety of engines, the number of which reached fifty, and which include environmental safety standards from Euro-3 to Euro-6 and power up to 2000 horsepower. The developers did not ignore the set for external tuning, among the variety of skirts, body kits, spoilers, light elements, exhaust pipes and other items, the virtual trucker of the ETS 2 simulator will pick up everything you need for your steel horse. And of course, it is worth focusing special interest on the original skins and tires of three types, the characteristic physics of control and movement, as well as an individual set of sound effects.

The Swedish Scania 1 Series truck with its high quality will take its rightful place among the default tractors included in the standard set of cars of the simulator. The player will easily pick up...