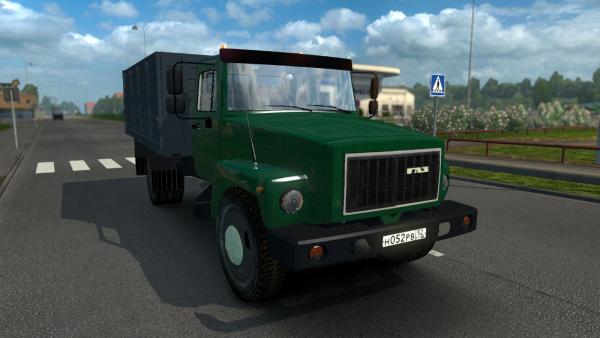 In the new version, cars acquired not only new textures, but also a modified and improved instrument panel, in which the devices themselves were calibrated and the color of the arrows was replaced. In addition, the running characteristics are improved, the gloss of painting, the radiator grille, headlights and much more are added. The Russian truck of the Gorky Automobile Plant will fit perfectly into the virtual roads of the standard version of the Euro Truck Simulator 2 simulator and in numerous modifications of Russian maps, such as the Southern region and the like.

Dear user of the site, traveling on the roads on the domestic truck, to feel like a real Russian trucker, we recommend you to download and install the mod Russian radio stations for any version of ETS 2 simulator!
GAZ truck tractor
Previous modNext mod

The Russian truck GAZ-3307, the sunset of the Soviet Union, causing a pleasant nostalgia now in the simulator. Through the efforts of developers, we have the opportunity to get behind the wheel of...

The Gazelle-Business car GAZ-3302 from the Gorky Automobile Plant is presented in decent quality, a high-poly model, coupled with high-resolution textures, give the mod maximum realism. On the...

Russian trucks KamAZ 5360, 5480 and 6460-73 will create a new gaming atmosphere with their appearance and color. High quality performance of the body and interior of the driver’s cabin will delight...