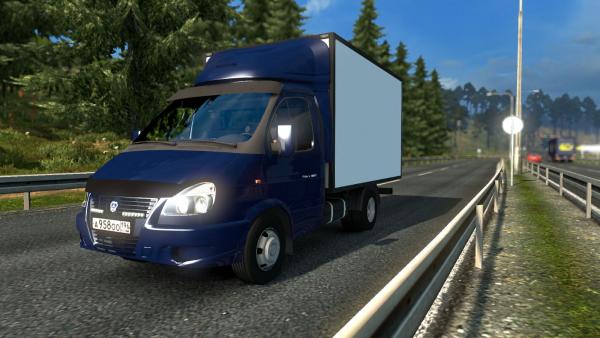 A series of Gazelle cars from the Gorky Automobile Plant originates from the first half of the nineties of the last century. At that time, Russia was experiencing difficult moments, but manufacturers had the strength to launch a series of these cars. Through engineering improvements and changes, the manufacturer was able to improve technical specifications, comfort and expand the range of cars. To date, the production of vans, small trucks, vans, special vehicles, technical services and other types of vehicles has been launched on the basis of the Gazelle. In terms of convenience and comfort, a small truck exceeds GAZ-3307 and GAZ-33081.

In our case, for Euro Truck Simulator 2 we have a GAZ-3302 van type Gazelle-Business type, made in decent quality. A lot of work was done by the authors of the add-on, the original model with high-resolution textures was taken as the basis, in connection with which it was possible to achieve the maximum effect of realism. When choosing a car in a car dealership, a virtual trucker has a chassis with one option for a cab, engine and gearbox, but there is a choice from a set of open bodies or booths. There are not so many elements from tuning, but to give an individual look you can install a plastic bumper, as well as painted in the color of the cab, the driver can add a body kit and some other objects.

Separately, you can describe the interior of the cabin, the developers of the mod tried to recreate everything that a real prototype has, the trim, seats and dashboard look so real that the driver is completely immersed in the gameplay. On the console there is the possibility of installing a GPS navigator, smartphone with the installed route planning program. There is another nice trifle in the form of an arrangement on the windshield of a functioning DVR. Well, for a pleasant trip, it is possible to connect a radio or walkie-talkie to communicate with a partner or a dispatcher.

Dear user of the site, traveling on the roads on the domestic truck, to feel like a real Russian trucker, we recommend you to download and install the mod Russian radio stations for any version of ETS 2 simulator!
GAZ van Gazelle
Previous modNext mod

Fans of Euro Truck Simulator 2 have a long-awaited opportunity to experience in the game world Russian Gazelle cars of almost all generations and modifications. Thanks to the grandiose mod, now in...

The small trucks GAZ-3310 - Valdai and GAZ-3302 - GAZelle, manufactured by the Gorky Automobile Plant, significantly diversify the virtual world of roads. Several options for the chassis have been...

The Brazilian bus Comil Campione 3.45 will now start plying the roads of virtual Europe. If desired, the player can choose their favorite engine with gearbox, decorate the exterior of a small set of...

Trucks of the Gorky Automobile Plant GAZ-3307 and GAZ-33081 with new textures, an improved dashboard, a gloss of paint, custom tuning of driving characteristics, wheels and much more will look great...