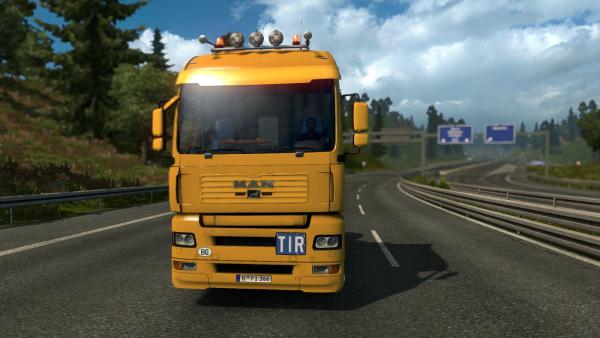 One of the most popular models of the MAN TGA main tractor, made in Germany, was produced in many modifications. The power units and chassis were equipped with trucks depending on the destination, although the most popular were the cars on the chassis with 4x2 and 6x4 wheel formulas. The machines were designed to transport a wide range of goods, from small lightweight to bulky, which can be easily checked with a pack of oversized cargo.

The MAN TGA heavy truck mod for Euro Truck Simulator 2 is quite interesting, the authors made unusual additions that realized the effect of realism, namely, an individual animation of the driver's seat. The first thing that catches your eye, when you start the engine, in the ignition switch, the key is turned, there are pedal and lever movements, and in combination with DLC Cabin Accessories support and its own set of sounds, it immerses the virtual driver in the interesting game world of the ETS 2 simulator.

When creating the modification, the developers used a professional model of the MAN truck, in the car dealership a trucker will be offered several options for the car. The choice is quite wide, three cabs, a chassis with 4x2, 6x2, 6x4 and 8x4 wheel formulas and several engines of different power. Tuning supports original elements, as well as some copyright additions, and of course I would like to note the quality of the interior design of the cabin cabin and the sleeping place for a partner. Any, even difficult task on this truck will seem to the player an easy walk.

Chinese trucks continue to conquer the virtual roads of the game Euro Truck Simulator 2. This time, the authors of the Celestial Empire presented a modern mainline tractor C&C U520, designed on a...

The famous Kenworth T908 heavy truck was developed by the American automobile corporation, but its production was established at the Australian branch of the auto giant. In addition, the authors...