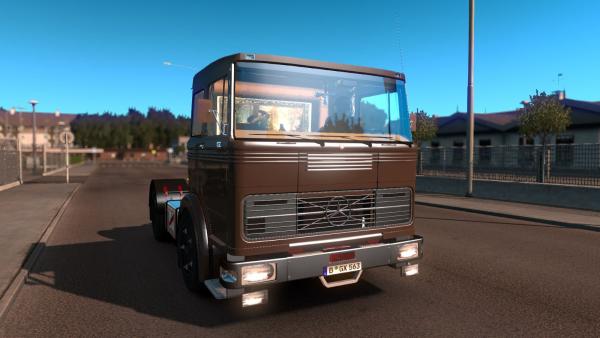 The serial truck Mercedes-Benz LPS 1632, produced from the second half of the sixties to the end of the seventies of the last century by Daimler-Benz. The cab of the car had an angular appearance, which was a trend of those years, it was equipped with an engine of 320 horsepower and a gearbox in five gears. Five-speed gearbox added power and maneuverability to the tractor.

The mod of the Mercedes-Benz LPS 1632 truck in Euro Truck Simulator 2 is presented in very good quality, although you will not find the installation elements for additional accessories or components for tuning, but the virtual trucker of the ETS 2 simulator will like a classic, recreated original interior interior to the smallest detail driver's cab with walkie-talkie, fan and realistic instrument panel with its own animation. The engine and gearbox are presented in the only classic version, but nevertheless the power of the machine will be enough for the tasks of the mod pack new cargo Flatbed. The new truck will noticeably change the game world for the better, since in addition to all of the above, it has its own set of engine sounds and physics of behavior.

Prestigious passenger car of the business class Mercedes-Benz C63 AMG in the back of the car in the ETS 2 simulator looks very realistic. When creating it, the authors used a detailed...

A powerful German passenger car Mercedes-Benz A45 will give players long happy hours spent playing the game. A pair of engines, a six-speed gearbox and a redesigned physics of behavior make...

The famous SUV of the golden youth, the Mercedes-Benz G65 AMG Gelandewagen is waiting for our testing. Indeed, when buying in a virtual car dealership, the player will be offered several options for...