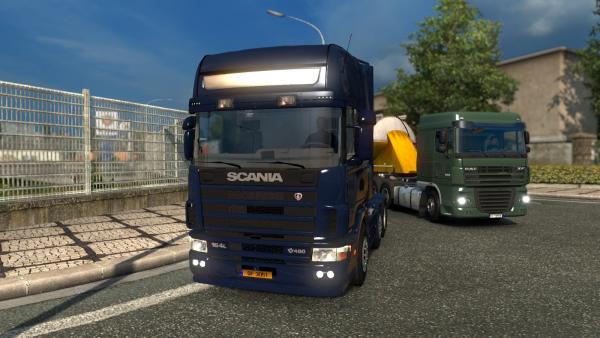 At the end of the last century, the third series of Scania trucks that were being manufactured was obsolete, so the designers of the automaker faced a sharp question about the release of new improved cars of this class. And in the mid-nineties, the first representative of the Scania 4 Series medium-tonnage truck left the car factory. The new cars retained recognizable features, but the cab got a more streamlined shape, the convenience and safety of the driver's seat were improved, and the technical filling was modernized.

The Scania 4 Series truck mod for Euro Truck Simulator 2 has only one TopLine cab variant, but the chassis and power units are available in a wider range of components, including eleven types of engines with power for every need and six types of chassis with various wheel formulas suitable for transporting various cargo and trailers. To give a visual personality, a virtual trucker can choose a suitable trim, of the four presented, among which there is a dashboard trimmed in wood. And of course, the authors didn’t forget to prescribe cockpit animation and control characteristics that were different from the ETS 2 standard. For external visualization, a set of spare parts from wings, bumpers and skirts is available, as well as additional slots for installing optional accessories are located on the body.

The Swedish Scania 1 Series truck with its high quality will take its rightful place among the default tractors included in the standard set of cars of the simulator. The player will easily pick up...