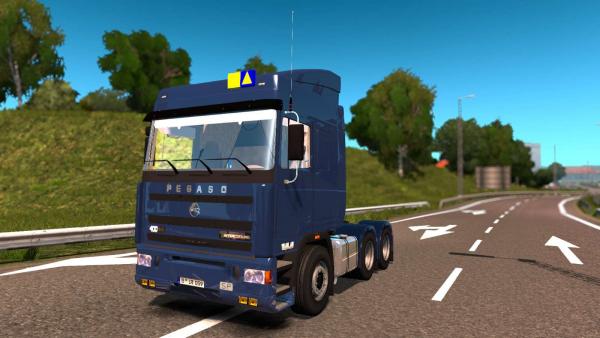 In the mid-eighties of the last century, Spanish designers, together with DAF Trucks engineers, developed and launched the Pegaso Troner truck tractor. The car was produced in many versions, and was well in demand in the UK. The truck, along with good technical data, had an increased safety class, which allowed transporting tanks with flammable liquids and other dangerous goods.

The mod of the Pegaso Troner tractor for Euro Truck Simulator 2 has four chassis with 4x2, 6x2 and 6x4 wheel formulas, one cab with an original interior and prescribed animation, the only engine with a capacity of 400 horsepower and four sixteen speed gearboxes. And also the modification is equipped with a small set of plates and characteristic items that a virtual trucker can install in any garage of the ETS 2 simulator.

Dear user of the site, carrying out the transportation of goods on the virtual roads of Europe, for a variety of gameplay, do not forget to download and install new maps for any version of the simulator ETS 2!
Pegaso truck DAF
Previous modNext mod