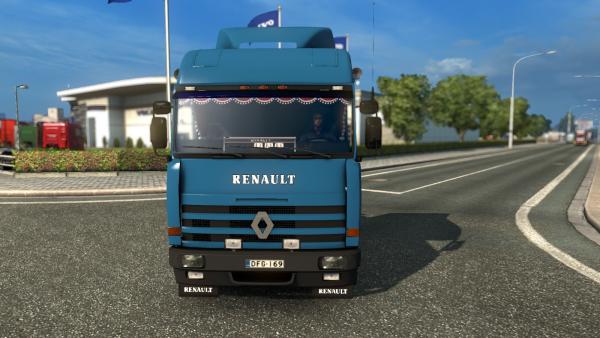 Under the brand name Renault R hides a whole family of tractors produced by the French automotive giant. The machine was launched in 1980 and continued until 1996, among which was the Renault Major truck tractor presented. A series of cars were produced with a chassis base on a 6x4 and 4x2 wheel arrangement, and were equipped with engines from 306 to 389 horsepower, which made it possible to transport a variety of goods, including tanks with combustible and hazardous liquids.

In our case, we have a mod of the Renault Major truck tractor for Euro Truck Simulator 2 on a chassis with a 4x2 wheel formula. A virtual trucker is waiting for a choice of cabs, of the two available, regular and with an installed spoiler. When buying, you can choose your own engine from the three available, from 380 to 460 horsepower, and of course the gearbox, the number of varieties of which is also equal to three. The authors managed to successfully implement the original interior of the cabin, add a set of characteristic sound effects and prescribe a classic animation of the dashboard. And of course, they didn’t forget about the small tuning kit.