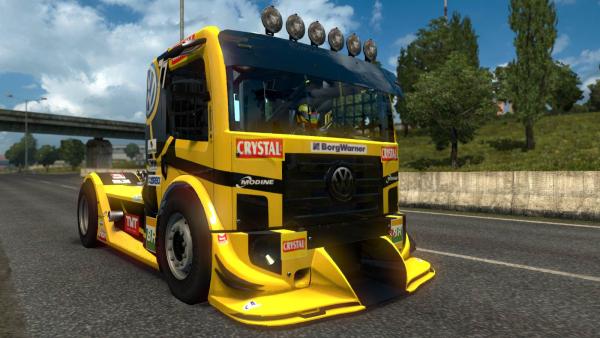 The sports modification of the Volkswagen Constellation Trucks Racing tractor is a special version of a custom-made production truck for the Brazilian Truck Racing Championship in Brazil.

The mod of the Volkswagen Constellation Trucks Racing sports tractor for Euro Truck Simulator 2 implemented on a 4x2 chassis has a photographic resemblance to a real prototype. At the request of the player of the ETS 2 simulator, it is possible to install on a truck any of eight powerful engines from 320 to 1160 horsepower and a dozen gearboxes at 6, 12 and 16 speeds, the strength of which can be tested on the racetrack. In addition, the authors recreated the corporate interior of the salon with animation, and to add brightness to the truck, they added five colorful original skins.

Dear user of the site, carrying out the transportation of goods on the virtual roads of Europe, for a variety of gameplay, do not forget to download and install new maps for any version of the simulator ETS 2!
Volkswagen tractor truck
Previous modNext mod

The flagship heavy truck Volkswagen Constellation, specially designed for the countries of the South American region, which was launched in Brazil. In the simulator, the truck appears in all its...