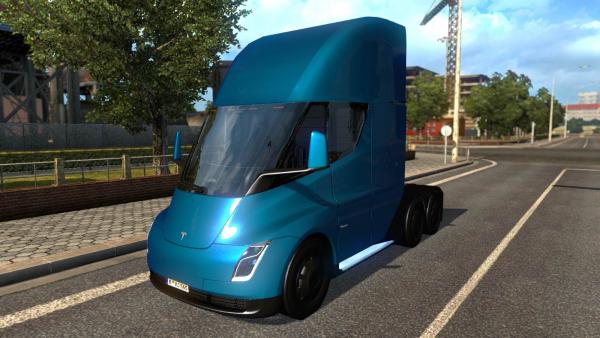 The American company Tesla, specializing in the development of electric vehicles, has been creating and manufacturing electric vehicles for several years. At the moment, production of passenger cars has been mass-adjusted, one of the representatives of which is the Tesla Model S, but time does not stand still, and the company's engineers are actively developing freight transport. According to the designers, the truck will be able to cover a distance of up to 800 kilometers on a single battery charge during transportation of 36 tons of cargo.

The Tesla Semi electric truck mod for Euro Truck Simulator 2 is unique, as it was recreated by the authors from scratch, and original engineering drawings and technical specifications were used to create it. Modification developers have implemented two cab options, a couple of types of tractor chassis and the same number of gearboxes. In addition, the player of the ETS 2 simulator will be pleasantly surprised by the interior with maximum detail and well-written animation. Well, this technical masterpiece is completed, a set of branded trailers, which can be downloaded from the link below.

There are special trailers for the Tesla truck for the simulator versions 1.30 and 1.31, which can be download here.

Dear user of the site, carrying out the transportation of goods on the virtual roads of Europe, for a variety of gameplay, do not forget to download and install new maps for any version of the simulator ETS 2!
Tesla truck tractor electric car
Previous modNext mod