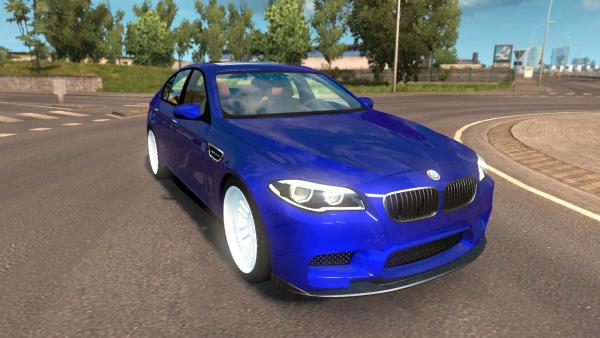 A sophisticated version of the fifth series BMW, the BMW M5 F10, was unveiled at the prestigious Frankfurt Motor Show in 2011. The new sedan car is different from the serial version of the new suspension with reduced ground clearance and an engine with a capacity of 575 horsepower.

The mod of the BMW M5 F10 passenger car for Euro Truck Simulator 2 has an interior with high detail and well-written animation, a distinctive feature of the add-on is the ability to choose an option with an open hood, trunk lid and doors. When buying a car, the player of the ETS 2 simulator will be presented with a version of the car with an original engine of 575 horsepower, a seven-speed gearbox, and with the option of painting the body in any color, including metallic. In addition, the modification includes its own set of sounds.

The mod of the sports version of the fifth-generation passenger car BMW M5 F10 has pretty good optimization, the developers of the add-on have implemented their own characteristics and a set of...