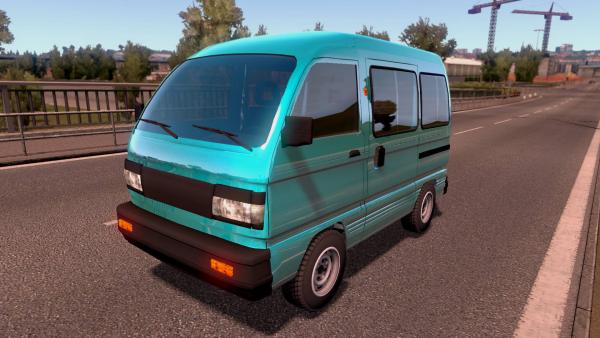 The Daewoo Damas minivan from the South Korean company GM Daewoo has been produced from 1991 to the present, its appearance has many similarities with the Japanese Suzuki Carry, which ETS 2 sim players were lucky to meet. The car is equipped with a 38 horsepower engine and a manual gearbox.

The Daewoo Damas car mod for Euro Truck Simulator 2 has a pretty good appearance, thanks to a realistic three-dimensional body model, and an original interior with basic animation. The authors implemented a single engine with a capacity of 100 horsepower, and two five-speed gearboxes. Unfortunately, the car does not have the possibility of tuning, but a set of its own sounds has been added, physics and an alternative to painting the body in any color, including the metallic type, are prescribed.

Dear site user, for cargo transportation by passenger car, do not forget to download and install the mod Passenger trailer for all ETS 2 simulator versions!
minivan Daewoo
Previous modNext mod

The small size Japanese car of the eighth generation Suzuki Carry will fit perfectly into the author's modifications of locations with left-hand traffic, as it has a right-hand drive. Three versions...