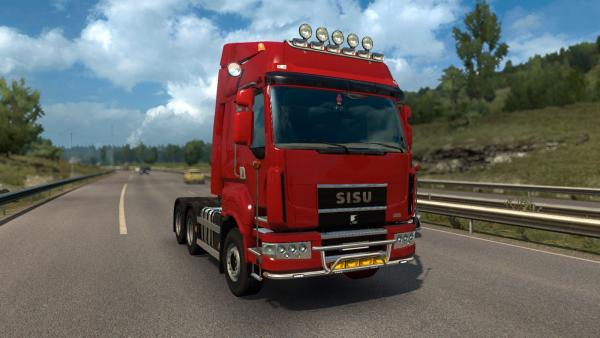 Europe is famous for the production of high-quality and comfortable trucks. The developers of the simulator tried to implement almost all the representatives of European automobile giants in the game, but undeservedly forgot about the truck manufacturer from Finland. For some reason, the authors of ETS 2 ignored the countries of the Scandinavian peninsula not only by cars, but also by their territories. Thanks to the enthusiasts, one drawback was solved by the Northern Scandinavia map mod, and here the new authors created a virtual version for the simulator of a series of Finnish tractors Sisu R500, C500 and C600.

The Sisu R500, C500 and C600 truck mod in Euro Truck Simulator 2 has several chassis options, equipped with standard engines and gearboxes. The quality of the cabin and the interior of the cabin is at a high level, where on the windshield it is possible to place a GPS navigator. From spare parts to give individuality to the appearance of a truck, a virtual trucker is available body kits, exhaust pipes, bumpers and other elements. Despite the modesty of the add-on, the modification fits perfectly into the gameplay, and is ideal for fulfilling the tasks of transport companies for the transport of goods, including additional trailers from copyright mods, for example, from the Big Heavy Pack.

Dear user of the site, carrying out the transportation of goods on the virtual roads of Europe, for a variety of gameplay, do not forget to download and install new maps for any version of the simulator ETS 2!
Sisu truck tractor
Previous modNext mod