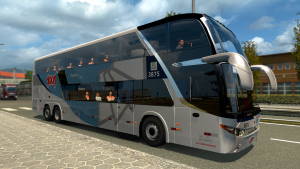 Does the number of vehicles such as buses seem minimal? In this case, you should take care of the variety. Yet passenger transportation is not in last place in the case of Euro Truck Simulator 2, they are interested in a large number of players. In order to significantly increase the number of buses, a lot of effort is not necessary. It is enough to install special mods. List of existing vehicles for ETS 2 can be very long. But it’s obvious that if you want to make the game as diverse as possible, you should have enough mods, with which we can help you! 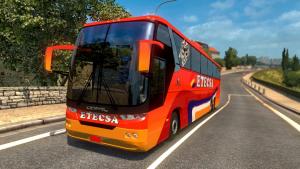 The Brazilian bus Comil Campione 3.45 will now start plying the roads of virtual Europe. If desired, the player can choose their favorite engine with gearbox, decorate the exterior of a small set of accessories and paint it with fifteen bright skins. The developers of the mod prescribed their own physics of behavior, realized the effect of smoke, the opening passenger door and much more. 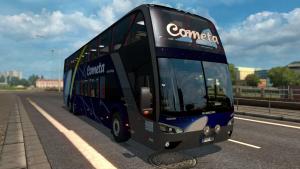 A series of tourist buses Scania Busscar Panoramico DD designed for long-distance routes begins to travel on the roads of virtual maps of Europe and copyright locations. The mod is made in high quality, when it was created by the developers, a solid three-dimensional model was used. The authors have implemented several options for engines, gearboxes, added a set of original sound effects and several branded skins. 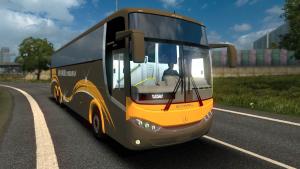 The tourist bus Comil Campione 3.65 is a joint brainchild of Brazilian designers and engineers from Mercedes-Benz, which gave it many similarities with German transport. The virtual version of the bus is very easy to manage, the authors implemented the characteristic engine and gearbox, the original interior of the cabin with animation, added a set of their own sound effects and five signature skins. 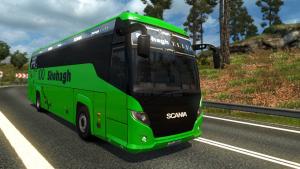 The comfortable Scania Touring K360 bus in the right-hand drive version will allow you to easily deal with passenger transportation on locations with left-hand traffic. The player’s choice is provided with a wide range of technical fillings and a small set of items for external tuning. The authors recreated the original interior of the cabin and prescribed support for DLC Toys, and the inherent physics of behavior will give the ride maximum comfort. 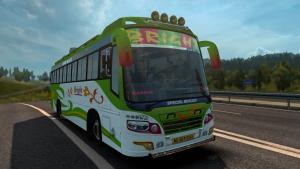 The new Maruti / Ashok Leyland bus from the homeland of tea, elephants and endless warm sandy beaches will now delight fans of the ETS 2 simulator. The Indian vehicle is built on a two-axle chassis, has a right-hand drive, which simplifies the transportation of passengers on UK roads and on new maps that implement some Asian left-hand drive countries. Players will be satisfied with the technical equipment and spare parts. 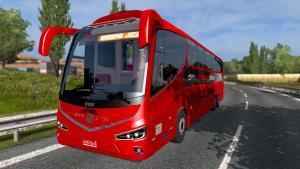 Spanish buses Irizar i8 is almost impossible to meet on roads outside this country, since they are not supplied to the international market. However, Euro Truck Simulator 2 players have the opportunity to experience a virtual version of this engineering miracle. The passenger vehicle has a single chassis, four engine options and three gearboxes. The passenger compartment is reproduced with precision and has an animation of the instruments. 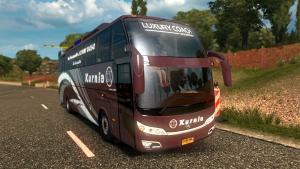 The Neoplan Jetliner MT passenger bus was produced until 2000. It gained special popularity in the countries of Asia, where it is successfully operated today in suburban and intercity routes. The virtual version of the transport has a right-hand drive configuration; the set contains three types of engines and gearboxes. There is a choice of several branded skins, two types of interior, a sound pack and additional attributes. 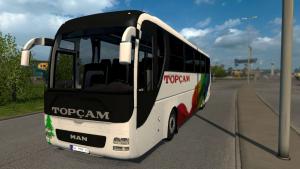 The second generation of the popular Man Lion’s Coach bus, model 2002, on a 4x2 chassis. In technical terms, the vehicle is equipped with an engine with a capacity of 420 horsepower and a six-speed gearbox. The add-on kit includes a pair of skins and a scheme for your own color coloring. The player has the ability to open and close the door with the appropriate key. 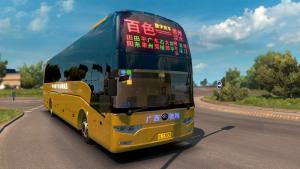 Developing by leaps and bounds, China at the CIAPE exhibition in Beijing in 2009 introduced the comfortable Yutong ZK6146H tourist bus from Zhengzhou Yutong Group Co. Thanks to the efforts of the authors of the mod, we have the opportunity to test this miracle of engineering. The bus is built on a chassis with a 4x2 wheel arrangement, is equipped with a 360 horsepower engine and a six-speed gearbox, has a pack of original sounds. 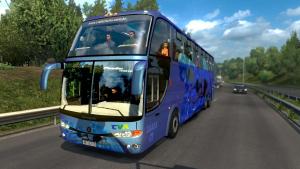 Bus Marcopolo Paradiso G6 1550 LD, from a well-known Brazilian manufacturer, built on a chassis with a 6x2 wheel arrangement, the authors of the mod implemented a functional of twelve engines and six gearboxes with their own physics and a pack of original sounds. For the player, several colorful skins are available, the ability to tint glass, it is available to seat in the passenger compartment, as well as change the color scheme of the seats, curtains and interior.