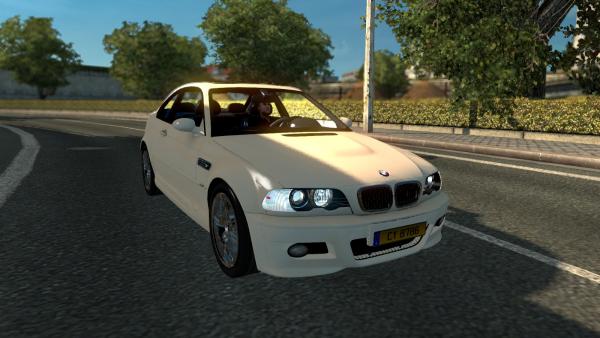 A bright representative of the fourth-generation serial passenger car of the third BMW series: BMW E46, which was launched in 1998. In 2006, the management of the company decided to curtail production, for all the time more than three million copies of cars left the gates of the Bavarian company. The passenger car was assembled with various types of bodies, among which were station wagons, five-door and three-door sedans and coupes.

The mod of the BMW E46 passenger car for Euro Truck Simulator 2 is represented by two variations of the car, with a conventional coupe body, and a sports version of the GTR with a set of two original skins that you can choose when buying or in a car repair shop. In the sports version, our BMW is quite capable of competing in speed with its virtual brother BMW M4 F82. The driver of the ETS 2 simulator will be pleased with a set of original alloy wheels, a high-quality palette of sound effects and finely tuned physics of behavior. The authors of the add-on did not forget to convey the entire gloss of the interior with animated instruments on the panel.

Sporty Mitsubishi Lancer Evolution high-speed car, which differs from the serial version by a more powerful engine and the presence of the corresponding attributes. Upon purchase, original wheels are...